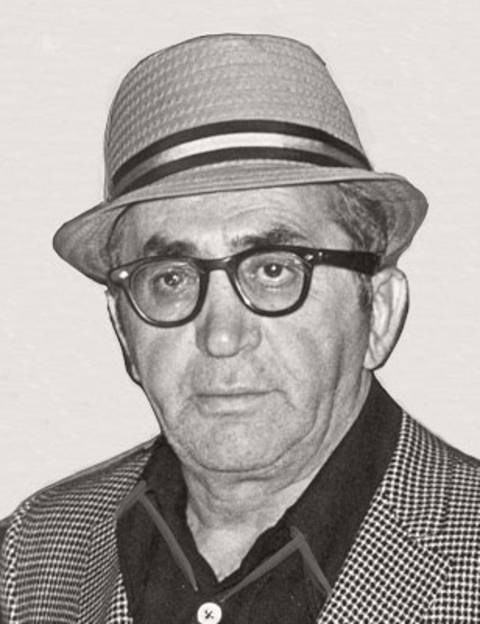 Daniel "Danny" Sansanese was born May 28, 1908, in Buffalo to Gerardo and Maria Rinaldo Sansanese. His parents both were immigrants from Sicily who arrived in the United States in the 1890s.

Danny began criminal activities at an early age. On Dec. 15, 1921, when he was 13, he was arrested for grand larceny. The charge was reduced to juvenile delinquency. The court ordered that he be placed on probation and make restitution.

Following a March 13, 1927, arrest for vagrancy, the authorities noted that Danny's automobile was a match for one that had been used in a series of robberies. Sansanese was held on an open charge but later released due to lack of evidence.

Just two months later, Sansanese was critically wounded in a gun battle, when police interrupted a morning holdup of a Buffalo drug store. Sansanese's accomplice Domenic DiNapoli was killed in the exchange of gunfire. Sansanese was treated at Columbus Hospital for a bullet wound in his back. While there, he was arrested and charged with robbery. Following a guilty plea, he was sentenced to serve from seven to 15 years in prison. He was paroled on Nov. 26, 1932.

In 1935, a Bryant Street barber identified Sansanese, Angelo Polizzi and Joseph Gatti as the three men who robbed him of $114 at his shop on the morning of Nov. 19. Sansanese and Polizzi were convicted of first-degree robbery. As second-felony offenders, they were sentenced to maximum terms of 30 years at Attica State Prison. Gatti was acquitted of robbery but convicted of possession of a dangerous weapon.

Sansanese developed a strong relationship with Joseph Fino while both were doing time in Attica. They became gambling and loan shark racket partners after their releases. Sansanese was paroled from Attica on Dec. 23, 1944.

Sansanese, Fino and Edward Scillia, all of Buffalo, and Russell Mancuso of Utica, were charged in 1950 with the burglary of an American Legion Club in Oxford, NY. Mancuso pleaded guilty to misdemeanor unlawful entry. He received a one-year suspended prison sentence and a $500 fine. The other three defendants pleaded guilty to the burglary and were sentenced to two and a half to three years. They were paroled Oct. 6, 1953.

In the late 1950s and early 1960s, authorities identified Sansanese as the chief enforcer and collector for Frederico Randaccio. He was associated also with Buffalo underworld leaders Pasquale Natarelli, John Cammilleri and Joseph Fino, and seen in the company of Salvatore "George Raft" Bonito, Albert Billiteri and Pascal Politano. Sansanese was questioned in this period as the prime suspect in the unsolved gangland slayings of Frank and Fred Aquino, Richard Battaglia, Vincent Santangelo, Anthony Palestine, Alberto Agueci and Charles Gerass.

The McClellan Senate Investigating Committee learned in 1963 that Sansanese was a capodecina of the western New York Mafia and an inveterate gambler with no legitimate source of income.

Sansanese and several other high-ranking Buffalo Mafiosi were arrested for gambling during an Oct. 7, 1966, police raid on the Blue Banner Social Club. He was among the three dozen men arested in the May 8, 1967, raid at Panaro's Lounge. Charges against him were dismissed.

A strong supporter of the late 1960s rebellion of Buffalo Mafiosi against Niagara Falls-based crime boss Stefano Magaddino, Sansanese's underworld authority was increased by the success of the rebellion. When Buffalo Crime Family acting boss Sam Pieri was incarcerated in the early 1970s, acting underboss Joseph Fino stepped up to the top spot and named Sansanese his underboss. 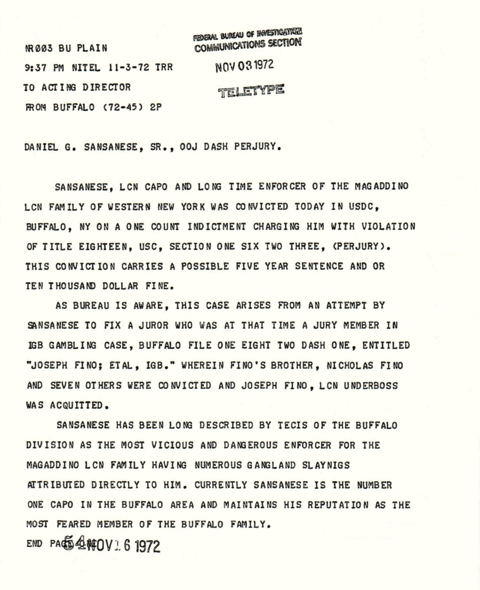 During a 1972 investigation into attempts to tamper with the jury in a Fino gambling conspiracy case, Sansanese gave conflicting grand jury testimony and was charged with perjury. He was convicted of the charge and sentenced to five years in prison. Failing health - likely related to the prostate cancer, for which he was treated - caused his release after one year. 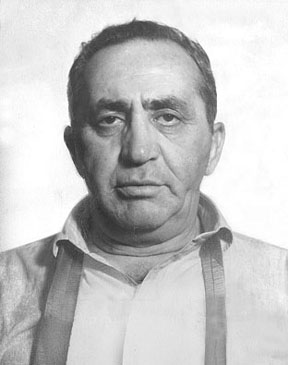