John Cammilleri was born May 8, 1911, to Angelo and Lucia Diana Cammilleri in Campobello Licata, Sicily. He crossed the Atlantic with his mother and three siblings at the age of five, arriving in the U.S. aboard the S.S. Giuseppe Verde on May 30, 1916.

Cammilleri was 19 when he was first arrested. The original charge of grand larceny was reduced to petit larceny, and Cammilleri received a suspended three-month prison sentence and a $10 fine. He was again arrested for grand larceny on June 5, 1931. That charge, stemming from the theft of an automobile, was reduced to malicious mischief and resulted in a $15 fine.

Cammilleri's good fortune in the courtroom continued two months later. He was arrested for first-degree assault after firing a gunshot at Joseph Morabello. The court discharged him.

The following summer, he was arrested after entering a Dante Place store and stealing $58 from its cash register. Convicted of third-degree burglary, he was given a suspended prison sentence and two years of probation.

At about this time, Cammilleri joined the DiCarlo Gang and began shaking down operators of craps games and bookmaking parlors for a share of their profits. He was arrested Oct. 2, 1933, with DiCarlo Gang members Anthony Tuttino, Sam "Doc" Alessi and George Rolando. The group was charged with first-degree robbery and extortion after holding up John Rogers for $22 and threatening to kill him if he did not make $5 weekly payments to the gang. Cammilleri was convicted and sentenced on Feb. 2, 1934, to a 20-year term in Emira Reformatory.

Cammilleri was labeled "Public Enemy No. 14" on a list compiled by Buffalo Police Commissioner Austin J. Roche, and his criminal record was filed with the FBI.

Released on parole in the summer of 1936, Cammilleri became a construction labor foreman with Laborers Local 210. In 1948, he established the J.C. Concrete Company and began working closely with Victor Randaccio to ensure Magaddino Crime Family control of Local 210. Cammilleri partnered with Frederico Randaccio and "Pat Titters" Natarelli to form Frontier Lathers, Inc., in 1960. The company supplied barricades and construction warning signs. Using his influence over Local 210, Cammilleri was able to extort contactors into using the services of the new company. 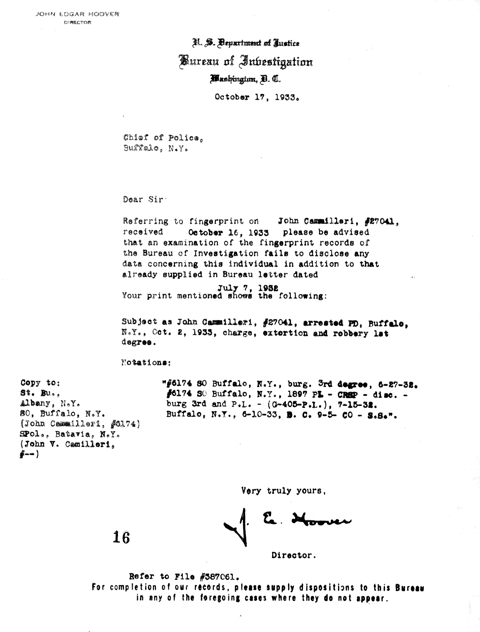 Cammilleri was identified as a Magaddino Crime Family lieutenant in a chart prepared for the U.S. Senate's McClellan Committee in October 1963. The FBI kept constant watch on his activities and documented his regular meetings with higher-ups at the Magaddino Memorial Chapel in Niagara Falls. In 1965, the New York Commission of Investigation questioned him under immunity about criminal activities in Rochester.

Cammilleri was among three dozen men, including Joseph DiCarlo, Frederico Randaccio and Pasquale Natarelli, arrested in the May 8, 1967, raid at Panaro's Lounge. Charges of consorting with known criminals were later dismissed in Buffalo City Court.

As events of the late 1960s drove a wedge between Buffalo Mafiosi and their Niagara Falls-based leadership, Cammilleri lent his support to a rebel underworld faction headed by acting boss Sam Pieri, underboss Joseph Fino and consigliere Joseph DiCarlo.

In 1969, Cammilleri was found guilty of testifying falsely to a federal grand jury. He was sentenced to two years of probation.

Cammilleri's links to organized crime and organized labor came to light in June 1971, as a federal grand jury probed underworld involvement in the construction of Buffalo's new Federal Building. Early stages of the project had been plagued by delays and cost overruns relating to problems with workers from Laborers Local 210. After the contractor hired Cammilleri as a labor coordinator, all proceeded smoothly.

Cammilleri did not keep his disappointment a secret. He spoke angrily with Joseph Fino, expressed discontentment with Pieri's leadership and threatened to pull his crew out of the Buffalo Crime Family.

On the evening of May 8, 1974, Cammilleri celebrated his 63rd birthday with friends at Buffalo's Roseland Restaurant. He left briefly to attend a wake and then went back to the restaurant. As he stepped from his automobile, a light-colored sedan squealed to a stop behind him. A man armed with a .38-caliber revolver jumped out of the sedan and fired three shots, leaving Cammilleri dead on the sidewalk.

plaries
Where was the camera when he was murdered? The picture of him leaving the restaurant was probably the last one ever taken of him.
If the criminals were being so closely watched how is it possible that so many of them were murdered. More than
50 or so were killed by rival gang members in the years covered in Volume 1 of the DiCarlo book.

John Cammilleri was a Church Usher for years at St. Amelia's in Tonawanda NY. He dressed like a movie star and you couldn't miss that big pinkie ring when he passed the collection basket down the pews. A lot of the people wondered why this soft spoken, 'religious' active church member, dapper and wealthy looking guy lived in our middle class working neighborhood. He told people he worked construction! And there was another guy in the neighborhood who said he was a Union laborer and. Some wondered how the hell could he afford boarding schools for his kids! Well, we found out after the shooting at the Roseland Restaurant! :)

Even though the man that shot him was fingered by the guy who sold him the gun to commit the crime he has never been convicted for the crime why? I guess being a rat for the FBI has it's advantages?