Paolo (Paul) Palmeri was born Oct. 1, 1892, in Castellammare del Golfo, Sicily, the youngest son of Francesco and Anna Caleca Palmeri. He and his two brothers, Giovanni and Benedetto (Angelo), were raised in an upper middle class family, supported by their father's work as a merchant.

At the age of 16, Paul Palmeri sailed for the United States. He arrived in New York City aboard the S.S. Prinzess Irene on Feb. 27, 1909. He moved into the Italian colony of lower Manhattan and became employed as a barber.

Elena (Helen) Curti, born in Italy on Oct. 24, 1896, became Palmeri's bride in New York City on July 27, 1914. Palmeri's best man was Silvio Tagliagambe, a subordinate of the U.S. Mafia boss of bosses Salvatore "Toto" D'Aquila. (Tagliagambe was shot to death in 1922. Giuseppe "Joe the Boss" Masseria, a D'Aquila rival, was charged with the murder.)

Paul Palmeri, his wife and their two children, Anna and Ernesto, moved from New York City to Niagara Falls in 1920. There he assisted his brother Angelo with the organization of bootlegging rackets. Two additional children, Marie and Frank, were born to Paul and Helen Palmeri while they resided in Niagara Falls.

The Palmeri brothers, in association with the Sirianni brothers, "Don Simone" Borruso, Joseph H. Sottile and Canadian crime boss Rocco Perri, controlled the flow of illegal liquor into the U.S. from Canada. At the same time, Paul and Angelo Palmeri went into business together as produce importers and commission merchants. 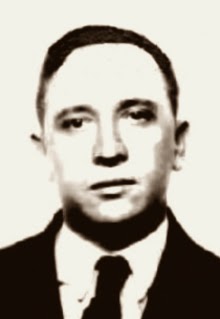 In 1922, Angelo left Niagara Falls for Buffalo, where he temporarily assumed control of the local Mafia organization following the death of boss Giuseppe DiCarlo.

Paul Palmeri was naturalized a U.S. citizen on June 4, 1923. A character witness on his August 1922 citizenship application was the notorious bootlegger Joseph H. Sottile.

In 1928, Palmeri went into a new line of work, partnering with Alfred Panepinto in the Panepinto & Palmeri Funeral Home in Niagara Falls. By that time, Palmeri was a trusted member of a western New York Mafia organization commanded by Stefano Magaddino.

When a factional split in the U.S. Mafia resulted in the Castellammarese War, Palmeri naturally sided with the Castellammarese and supported their New York City standard-bearer Salvatore Maranzano in his war against Giuseppe Masseria. Police investigating Maranzano's murder in September 1931 found Palmeri's address and telephone number in Maranzano's memo book.

Palmeri was arrested Nov. 9, 1931, along with four suspected accomplices in Chicago. The group was charged with kidnapping wealthy fur dealer Alexander Berg. Members of the Berg family were instructed to meet with his captors. Police went to the meeting location and found Palmeri, "Dago Lawrence" Mangano, Frank Chiaravalloti, Sylvester Agoglia and Angelo Caruso waiting in a parked car. The five men were released the following day as no evidence had been found to connect them to the abduction of Berg.

While the arrest did not result in convictions, it served to document some important underworld connections just two months after the death of Maranzano. Palmeri was a trusted member of Magaddino's western New York organization. Mangano was a prominent member of Alphonse Capone's Chicago Outfit. Chiaravalloti and Agoglia were Chicago residents - Agoglia shared a common Brooklyn gangland background with Capone. Caruso was a resident of New York City and was second-in-command of a Brooklyn-based Castellammarese crime family formerly led by Maranzano.

Palmeri was arrested in New York City the following year, as police investigated the murder of Pittsburgh Mafia boss John Bazzano. Bazzano had ordered the murder of John, James and Arthur Volpe, Neapolitan racketeers from the Pittsburgh area, and was summoned to New York to answer for his actions. Mafia leaders were unsatisfied with his explanation. Bazzano's dead body was found tied with clothesline and wrapped in a burlap sack. He had been stabbed multiple times with ice picks.

In the spring of 1934, Palmeri was charged with assaulting a police officer at the scene of a traffic accident. His conviction led to his first prison sentence, thirty days in county jail.

In the mid-1930s, boss Stefano Magaddino made demands for tribute payments from regional gambling bookmakers and encountered considerable resistance. Frank and Russell LoTempio of Batavia were believed to be leaders of a group opposing Magaddino. The conflict became bloody in May 1936, when a bomb exploded in a Niagara Falls home, killing Magaddino's sister Arcangela Longo. Paul Palmeri delivered the eulogy for Longo, noting his relationship with the Magaddino family since his childhood in Sicily. Magaddino's vengeance was swift. Frank LoTempio was murdered the following month. Russell LoTempio was severely injured when a bomb exploded in his automobile a few months later.

The Panepinto & Palmeri partnership dissolved. Alfred Panepinto was a brother-in-law of the LoTempios. By 1937, he left Niagara Falls and resettled in Batavia. He was murdered there in August 1937.

Palmeri was active in the local chapter of the Castellammare del Golfo Society. The group's 25th anniversary in 1939 was marked with a ball and banquet at the Hotel Lafayette in Buffalo. Stefano Magaddino held the position of banquet general chairman. John C. Montana, president of the local Montedoro Society (and Magaddino's underboss), was an honored guest speaker at the event. Paul Palmeri served as toastmaster and praised the accomplishments of prominent Italian Americans in the region.

Paul Palmeri moved out of Niagara Falls in 1941, reportedly after a rift with Stefano Magaddino. He relocated to Passaic, New Jersey, and reestablished a working relationship with Willie Moretti. At the time, Moretti was a key figure in the Frank Costello (later Genovese) crime family. Decades earlier, Moretti had run gambling rackets for the Palmeris in Niagara Falls.

In 1942, Palmeri was indicted as one of the leaders of an alcohol bootlegging ring that evaded $3.5 million in federal taxes between 1933 and 1941. Palmeri was convicted and sentenced to three years in prison and a $9,000 fine.

The Palmeri-Moretti relationship was strengthened through the marriage of Palmeri's son Frank to Moretti's daughter Marie in 1947. When Moretti was murdered in 1951, police noted Palmeri's closeness to the victim and questioned him as a material witness.