Benedetto Angelo Palmeri was born Jan. 12, 1878, to Francesco and Anna Caleca Palmeri in Castellammare del Golfo, Sicily. Francesco was a successful merchant, and "Angelo" Palmeri was raised in an upper middle class family.

Palmeri traveled to the United States as an adult. He reached New York City aboard the S.S. Lombardia on Sept. 7, 1906. He initially found work in that city as a laborer on the docks.

In 1912, he relocated to Buffalo and opened a tavern on Dante Place. He supplemented his income by hosting gambling operations. Palmeri was one of eleven saloonkeepers arrested during an Aug. 28, 1912, gambling raid by Buffalo Police in the Canal District. He was convicted and fined $50.

Palmeri married Rosaria Mistretta on Oct. 5, 1913. Mistretta was a cousin of Buffalo Mafia boss Giuseppe DiCarlo's wife, Vincenza. By the end of the year, the newlywed Palmeris moved into the upper apartment of the DiCarlo family home on Buffalo's Seventh Street. There followed a period of unquestionable closeness between Angelo Palmeri and Giuseppe DiCarlo.

The two men entered into a partnership in the Dante Place saloon, and Palmeri served as underboss in DiCarlo's underworld organization.

"Their methods of operation were different," noted the police. "DiCarlo being a smooth peaceful worker and Palmeri more inclined to violence, they provided mutual protection for each other." [Buffalo Commercial Advertiser, Dec. 22, 1932.]

Palmeri's violent tendencies resulted in a 1915 arrest for assaulting a police officer. He was convicted and fined $250. His reputation was enhanced by the nickname "Buffalo Bill," reportedly awarded him because he wore cowboy hats and carried a holstered pistol.

Just a few months later, Rosaria Palmeri gave birth to a daughter. When the child was baptized in November 1915, two of Giuseppe DiCarlo's children, Joseph and Sarah, served as godparents.

Rosaria Palmeri subsequently developed serious health problems. She contracted influenza and pneumonia and died on Jan. 5, 1916, at the age of 29. Unable to tend to the needs of his infant daughter on his own, Angelo Palmeri left her in the care of his Mistretta in-laws in New York City.

His family life in tatters, Palmeri moved away from Buffalo and opened a cigar store in Niagara Falls. The store served as a front for gambling rackets run in association with the DiCarlo Mafia. (Future New Jersey crime figure Willie Moretti reportedly got his start in the underworld by operating craps games for Palmeri in Niagara Falls.)

In 1919, Palmeri married Loretta Mistretta, the older sister of his late wife. The couple and Palmeri's daughter by his first marriage moved into a Niagara Falls apartment.

In 1921, Angelo Palmeri was charged with the murder of Emilio Gnazzo. Gnazzo was shot by a gunman who jumped from behind a parked car and fired a bullet into his head. The victim's wife witnessed the killing and identified Palmeri as the gunman. A police investigation determined that Gnazzo, an inveterate gambler, was slow to repay a loan obtained from Palmeri.

When the murder case came to trial, prosecutors could not locate Gnazzo's wife. No other witnesses came forward to identify Palmeri as the gunman, and Palmeri was discharged due to insufficient evidence.

Following the death of Giuseppe DiCarlo in July 1922, Angelo Palmeri returned to the City of Buffalo. He moved himself and his family into the DiCarlo residence and temporarily took command of the Mafia organization in western New York. In October of that year, Stefano Magaddino was chosen as the next regional Mafia boss. Palmeri, Filippo Mazzara and Giuseppe DiBenedetto, all Castellammarese Mafiosi who held leadership positions under DiCarlo, oversaw Buffalo underworld rackets for Magaddino.

When Joseph DiCarlo was charged with intimidating a government witness in 1924, Palmeri was held as a material witness. DiCarlo and another gunman emerged from an automobile and shot at Joseph Patitucci, an informant scheduled to testify against DiCarlo in a narcotics case. Police believed Palmeri had been a passenger in the automobile. 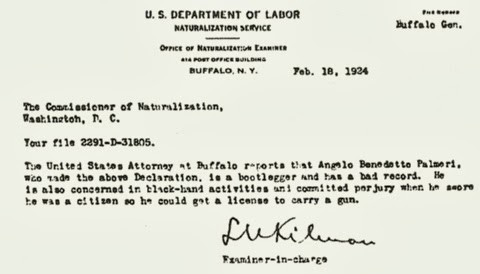 After a review of Palmeri's pistol permit, authorities charged the underworld leader with perjury. He had sworn incorrectly on the permit application that he was a U.S. citizen. A grand jury refused to indict him, and the charge was dropped. Palmeri was naturalized a citizen on Jan. 7, 1925.

Later that year, Palmeri used his influence in the Sicilian community to provide aid to the poor and emotionally devastated family of Joseph Gervase. The twelve-year-old Gervase had been molested and strangled to death by a drifter. Palmeri, Mazzara and DiBenedetto gathered donations from the shopkeepers in Buffalo's Italian colony to pay the boy's funeral expenses.

As the Castellammarese War erupted in the U.S. Mafia in 1930, Palmeri supported Salvatore Maranzano, leader of the Castellammarese-aligned faction in New York City. Palmeri met regularly with Maranzano and Mafioso Joseph Bonanno in Brooklyn, as they plotted strategy against reigning Mafia boss of bosses Giuseppe Masseria. (In his autobiography, A Man of Honor, Bonanno discussed his close relationship with Palmeri. Bonanno told of his visit to Palmeri's home during his November 1931 honeymoon to Niagara Falls.)


Palmeri faced increasingly severe health problems following the end of the Castellammarese War. He died in the driver's seat of his automobile, parked in his driveway, after suffering a stroke on Dec. 21, 1932. He was 54 years old.

Great numbers of residents from Buffalo's Italian colony attended Palmeri's funeral. It was said to be the "largest ever turnout for an Italian-American citizen of Buffalo." In the immigrant neighborhoods, Palmeri was remembered as a friend who provided for them in times of need, when pride kept them from appealing to organized charities.

"Many tears were shed by those whose homes were heated, whose tables were made bountiful and whose children had been clothed by the largess of Angelo Palmeri."


Ceremonies began at the Palmeri home, 295 Jersey Street, and continued with a Mass at Holy Angels Church on Porter Avenue. Palmeri was interred on Christmas Eve alongside his first wife, Rosaria, in a large family plot at Pine Hill Cemetery.

Palmeri's second wife, Loretta, also was buried in the plot following her death in 1953. 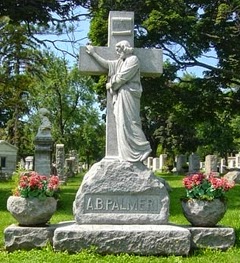