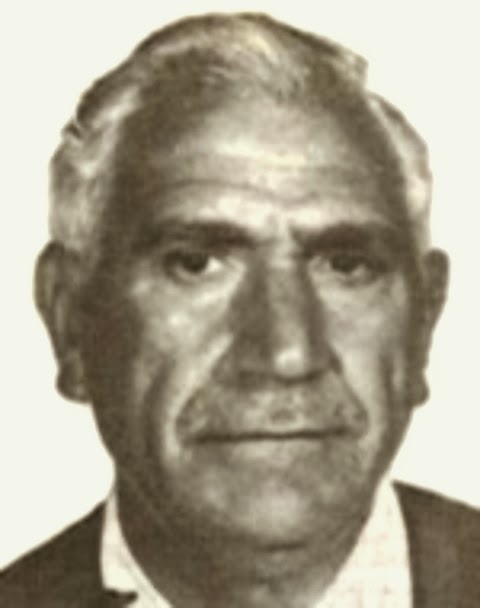 The Bonasera family has its roots in Vallelunga, Sicily. Vincenzo Bonasera, born there about 1865, and Lucia Spoto, about three years younger, were married in the community and raised their young family there. Cassandro "Tony the Chief" Bonasera was born in Vallelunga on June 18, 1897.

Lucia Spoto Bonasera died of complications of childbirth on Oct. 24, 1906, less than 11 months after her arrival in the U.S. (The baby also was lost.)

In 1908, Cassandro Bonasera lived with his father and three siblings in a tenement, 442 East 13th Street in Manhattan. He attended Public School 19, registering there under the name Anthony Bonasera. In this period, Vincenzo was self-employed as a tailor, and his older daughters did embroidery work.

Cassandro Bonasera left school upon completion of the sixth grade in 1911. By 1915, the family had relocated to Brooklyn, and was living at 7511 Thirteenth Avenue. The address falls within the Dyker Heights section of Brooklyn, near Bensonhurst. 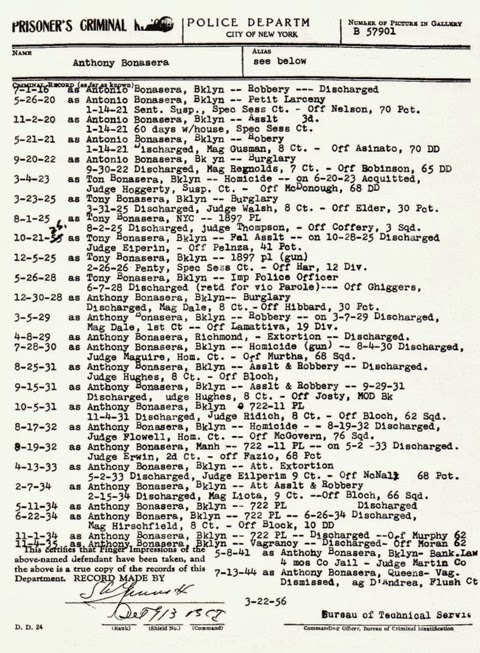 Bonasera's criminal record (above) began a year later with an arrest for robbery. (Interestingly, when registering for the World War I draft on June 5, 1918, Bonasera indicated that he was uncertain of his date or place of birth.) His second arrest, in 1920, resulted in a conviction for petit larceny and a suspended sentence.

During the 1920s, Bonasera teamed with John "Johnny Bath Beach" Oddo in managing Brooklyn gambling rackets for Mafia leader Frankie Yale (Ioele). More than a dozen arrests were added to Bonasera's growing criminal record in the decade. He was charged with such offenses as homicide, burglary, assault, extortion, and impersonating a police officer. He managed to avoid conviction in most of the cases. An assault conviction in 1920 sent him to the workhouse for 60 days. When convicted of possession of a revolver in 1925, he was sentenced to 18 months in county jail.

The origin of Bonasera's "Chief" nickname is unknown, but the nickname was in place by 1930. Bonasera and his close friend John Oddo became underlings of Mafia boss Joseph Profaci following Frankie Yale's murder in 1928. Bonasera ran floating dice games for the Profaci Family. He was repeatedly questioned by police in connection with Brooklyn homicides, including that of Yale.

On Dec. 22, 1930, Bonasera was seriously wounded in a shooting outside of his Brooklyn home, 7513 Thirteenth Avenue. He was hit in the head, neck and arm by six gangland bullets. True to the underworld code, he refused to identify his assailants to police.

The Bonasera and DiCarlo families had been closely acquainted in Vallelunga, Sicily. Giuseppe DiCarlo, father of Joseph DiCarlo, had been a friend of Vincenzo Bonasera. In 1933, Joseph DiCarlo's sister Sarah traveled with Bonasera's sister from Buffalo to Brooklyn. In Brooklyn, Sarah met Cassandro Bonasera. The two were married in Buffalo on June 28 of that year, with John Oddo serving as Bonasera's best man. Joseph DiCarlo gave away the bride during an elaborate wedding ceremony that was followed by a lavish reception at the Hotel Statler.

In 1939, a grand jury investigating money-lending rackets in Bensonhurst and Bath Beach, Brooklyn, indicted Bonasera and Oddo for loan sharking and extortion. Extortion charges were dropped in 1941, as Bonasera pleaded guilty to conspiracy to violate banking laws. He was sentenced to four months in prison.

Bonasera claimed in 1952 to be a self-employed dress manufacturer, partner in the Sara Lee Dress Company of 8403 Fifteenth Avenue in Bath Beach, Brooklyn, which employed 30 sewing machine operators. At that time, he resided at 1117 83rd Street in Brooklyn.

The following year, deportation proceedings were started against Bonasera. He was arrested as an undesirable alien on the grounds that he had been convicted of more than two crimes since entering the U.S. A special inquiry of the U.S. Immigration Department revealed that Bonasera had been arrested 25 times between 1916 and 1944. He was ordered deported in 1954. The order was withdrawn on appeal, when it was noted that Bonasera's record included just four convictions and only one could be construed as involving moral turpitude. By law, two such convictions were required for deportation.

Fifty-six-year old Bonasera found himself in an unusual position on Feb. 3, 1954. Two armed thugs approached him outside the Sara Lee Dress Company. One pointed a .45 caliber pistol at "the Chief's" face and demanded he turn over a cardboard box containing the weekly dress factory payroll. "Do you know what you're doing?" Bonasera asked the gunmen. "Do you know who I am?" The robbers were uninterested, and the unarmed Bonasera meekly turned over a cardboard box containing $835.

In the early 1960s, the Bonasera home in Brooklyn became a temporary residence for the financially troubled Joseph DiCarlo. In 1963, Joseph Valachi identified Bonasera as a member of the crime family commanded by Giuseppe Magliocco since the death of Giuseppe Profaci.