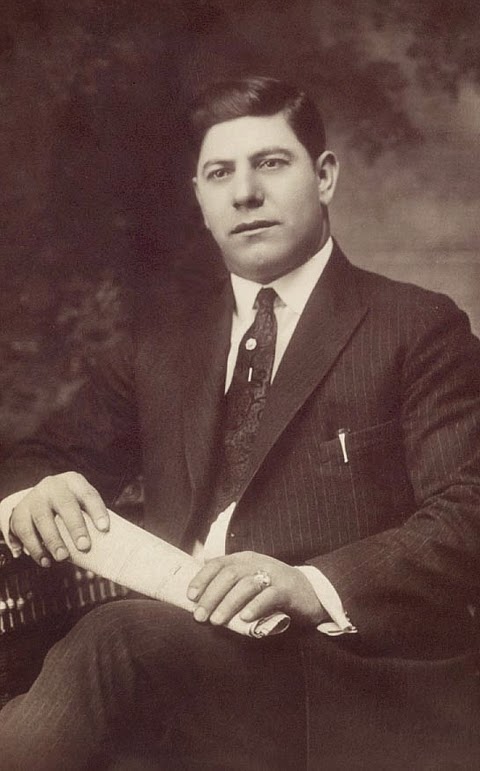 Filippo Mazzara was born Oct. 16, 1889, in Castellammare del Golfo, Sicily, to Camillo and Caterina Palmeri Mazzara. He sailed to the U.S. aboard the S.S. Brasile at the age of 17, arriving in New York City on Feb. 7, 1907. He joined relatives residing in the tenements on Stanton Street in Manhattan's "Little Italy."

On both sides of the Atlantic, the Mazzara family maintained a close relationship with the DiBenedetto family, also from Castellammare.

In 1910, Filippo Mazzara and Giuseppe DiBenedetto married sisters Antonina and Rosaria Pampalona from Castellammare. The double-marriage was celebrated at St. Anthony's Catholic Church in Buffalo, New York. After the marriages, the couples returned to New York City and settled in the Castellammarese colony of Brooklyn.

In the U.S. as well as in Sicily, Castellammarese Mafiosi were embroiled in a bitter rivalry that originated in their common hometown. The long feud is believed to have been the cause of the double-murder of Filippo Mazzara's older brother Antonino and Giuseppe DiBenedetto's brother Antonino in 1917.

During the 1921 investigation of the "Good Killers" case - a series of murders related to an ongoing feud among Castellammarese Mafiosi - police attempted to identify a man designated by one of the warring factions as "the chief." Based in Buffalo, "the chief" was believed responsible for issuing murder orders to Good Killers gang members and for coordinating with leaders in Castellammare del Golfo, Sicily. The title could have referred either to Giuseppe DiCarlo or Angelo Palmeri, but the investigation later focused on Filippo Mazzara.

Giuseppe DiCarlo died in 1922, and Mazzara was one of the Mafiosi considered as his successor. Another Castellammarese Mafia leader, Stefano Magaddino, was chosen. Magaddino eventually moved the headquarters of the western New York Mafia to Niagara Falls. Mazzara and Angelo Palmeri served as Magaddino's chief lieutenants in Buffalo.

In 1923, Mazzara established the Mazzara & Perna firm, a commission merchant business that controlled Prohibition Era sugar distribution in western New York. The business was highly profitable due in large part to the need for sugar in liquor moonshining. Control of sugar distribution also provided Mazzara with a measure of control over regional distilling operations. He became closely associated with the Lonardo brothers, leaders of the Cleveland Mafia and holders of a wholesale sugar monopoly in northeast Ohio. Mazzara also owned the Roma Cafe in Buffalo. The establishment was a regular meeting place for Buffalo Mafia members.

He remained close to the family of the late Giuseppe DiCarlo. In 1924, Mazzara and his wife served as witnesses to the marriage of DiCarlo's son Joseph to Elsie Pieri.

By 1925, Mazzara was viewed as a wealthy commission merchant and as a leader of the Italian colony in Buffalo. He was president of the local Castellammare del Golfo Society.

Violence erupted in Cleveland in 1927, as a Mafia faction led by Salvatore "Black Sam" Todaro and the Porrello brothers tried to wrest control of the corn sugar monopoly from the Lonardos. Brothers Joseph and John Lonardo were shot to death in a double-murder in October of 1927. Sugar-war violence reached Buffalo two months later.

Filippo Mazzara was killed Dec. 22, 1927. He was driving a vehicle on Buffalo's west side when two other automobiles, one a large touring car and the other a medium-sized sedan, forced him to the curb. A half-dozen gunmen jumped from the two automobiles and opened fire. A double-barreled shotgun was fired within two feet of the driver's side window of Mazzara's vehicle. The blast shattered all the car windows, crushed the left side of Mazzara's head and tore off part of the thirty-eight-year-old underworld leader's scalp. The attack occurred so swiftly that Mazzara had no opportunity to defend himself. A pistol that he carried at his waist had not been drawn. He was killed instantly. The gunmen returned to their cars and sped away.

Buffalo Police immediately connected Mazzara's killing with the recent Lonardo murders in Cleveland. They concluded that the same gang was responsible and believed that out-of-town gangsters were brought into Buffalo to eliminate the Mafia leader. The Callea brothers of Buffalo were suspected of engineering the attack on Mazzara. Vincenzo "Big Jim" Callea and his brother Salvatore, backed by the Porrello family of Cleveland, had begun competing for a share of bootlegging profits. They had set up speakeasies and distilleries in Buffalo and Niagara Falls in defiance of the powerful western New York crime family. After the assassination of Mazzara, the Callea brothers were for a time the dominant bootlegging faction in Buffalo.

Prompted by the brutal murder of Filippo Mazzara, the Buffalo Police Department created a new Italian Squad to investigate gangland murders in the city's Italian neighborhoods.


Hundreds of mourners swarmed the Mazzara home to pay their respects. Numerous floral tributes filled three rooms of the house. The most conspicuous display was an eight-foot-tall heart of roses surrounding a life-size photograph of Mazzara. Two large doves adorned the top of the heart. Over the gang leader's casket was draped a floral blanket created from hundreds of white Killarney roses.

Mazzara's underworld career disqualified him from the traditional Roman Catholic Mass of Christian Burial. A funeral procession to St. Mary's on the Hill Episcopal Church was led by a thirty-piece band and included more than 150 cars of mourners. It took eight trucks to transport the flowers to his gravesite at Forest Lawn Cemetery.